Honouring The End of Our Kindergarten Years

‘As Pure As Gold, As Clear As Crystal’ 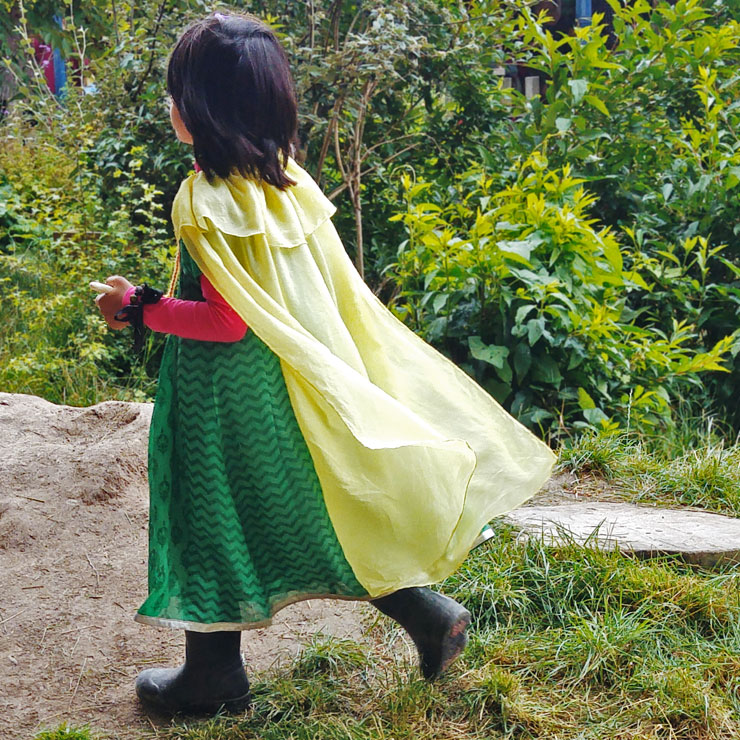 So, today was kind of an important day for our family.

Our eldest, now 6 years old, graduated from her Kindergarten class. Although in her type of school, it isn’t actually called a “graduation” but is instead referred to as “Crossing the Rainbow Bridge”.  I know, I know… It sounds a little hokey and a lot hippie but bear with me, as it was one of the most precious, special and thoughtful ceremonies I have ever attended at any age. It is a wonderful way to honour this transition and I really wanted to share some of it here with you.

My daughter attends a Waldorf Steiner School, where the kindergarten programme is for ages three to six and lasts for three years. In a Steiner Kindergarten, the emphasis is on developing good habits, good manners and good play, especially outdoors and through a love of nature and its seasons.  And wow, do those kids play! They play and play and play. There is no learning letters. No learning numbers. No academic tasks to complete. There is a lot of movement and building and making and baking in a classroom held by strong rhythms and teachers engaged in work worthy of imitation. It has been the loveliest of places to send Khadija these past three years and a true joy to see her grow strong and truly flourish, mashAllah.

But all stages must end and Khadija entered her final year of kindergarten (known as the Sunbeam Year) with much excitement. The Sunbeams spend most of the year preparing their provisions (more on these later) for crossing the threshold from the world of intense imagination and play to the world of study and primary school. At her school, this threshold is represented by a gorgeous giant arch festooned with flowers and foliage.

We entered the classroom this morning to find it beautifully arranged for this lovely ceremony. Chairs set just so, draped with gorgeous golden capes. The children’s work and provisions laid out for them to receive. Even the flowers were given special care and  decorated with sweet bumblebees made of acorns and wool.

Isn’t it amazing that the children made these cloaks themselves by boiling the leaves of the weld plant and dyeing the silk? The colour is just so rich.

The main ceremony began with the telling of a story about a group of children who find a beautiful bridge. They wish to go over it but cannot see the way until they meet a wise old woman who advises them that they must make some special things in order to continue. She encourages them to find a stick to whittle and carve into a sword. She then tells the children to find another stick on which to make and hang a rich, colourful weaving and finally she has them take yet another branch and some string from which to make a skipping rope. When the children have all three things ready, the path across the bridge is made clear and the wise woman says:

Now you are ready. Your sword keep with you for protection and courage to help you fight the dragons. Your weaving will remind you of the beauty of the rainbow and the patience needed to go on. And finally, your skipping rope will keep your feet and hands nimble as you continue on your journey.

After which each child, in their golden cloak,  is taken one by one to cross the threshold, but not before they are told this simple rhyme:

You have brought many blessings to our Kindergarten and for that I thank you.

Firm is the ground on which you stand
Wide lies the world on either hand
Mighty, the sun
Above your head
Will shine on the path
That you will tread.

Taking in hand her sword, weaving and skipping rope, I see my daughter face her teacher who says softly:

As pure as gold
As clear as crystal
Is your soul.

This last part touched me so deeply. I love the way it reaffirms a child’s innate goodness and my heart swelled with emotion at seeing my own Sunbeam walking through the arch. Farewell Kindergarten years – you have been wondrous and wonderful!

Here are a few more images from the day if you’d like to see:

The sword Khadija made from a branch she chose and then whittled and sanded and carved:

The skipping rope which was made by finger knitting the string, choosing branches from which to make the handles and then sawing, drilling and assembling it altogether:

And finally, here is the colourful weaving, each line so carefully placed and now hanging in its new home:

Afterwards, it was time to pose and play with friends and siblings!

“The most effective kind of education is that a child should play amongst lovely things.” – Plato

How We Celebrated The New Hijri Year

This site uses Akismet to reduce spam. Learn how your comment data is processed.

MAMANUSHKA is an award-winning, genuine and thought-provoking lifestyle blog which sits at the intersections of faith, motherhood and lived experiences. It is grounded in the belief that motherhood is a radical act essential in creating a truly just, equitable and compassionate world.

Founded in 2016 by Aiysha Malik and Sumaya Teli, Mamanushka also takes inspiration from the words of the poet Jalal al-Din Rumi who advises us to be in this world like ‘a lamp, a lifeboat or a ladder. Help someone’s soul heal. Walk out of your house like a shepherd.’

Thank you for being here, for reading, sharing and trusting us with your time, your advice and your own stories.

Have something you’d like to discuss or ask about? Don’t hesitate to write us here or message us on instagram.

Find Us On Insta!